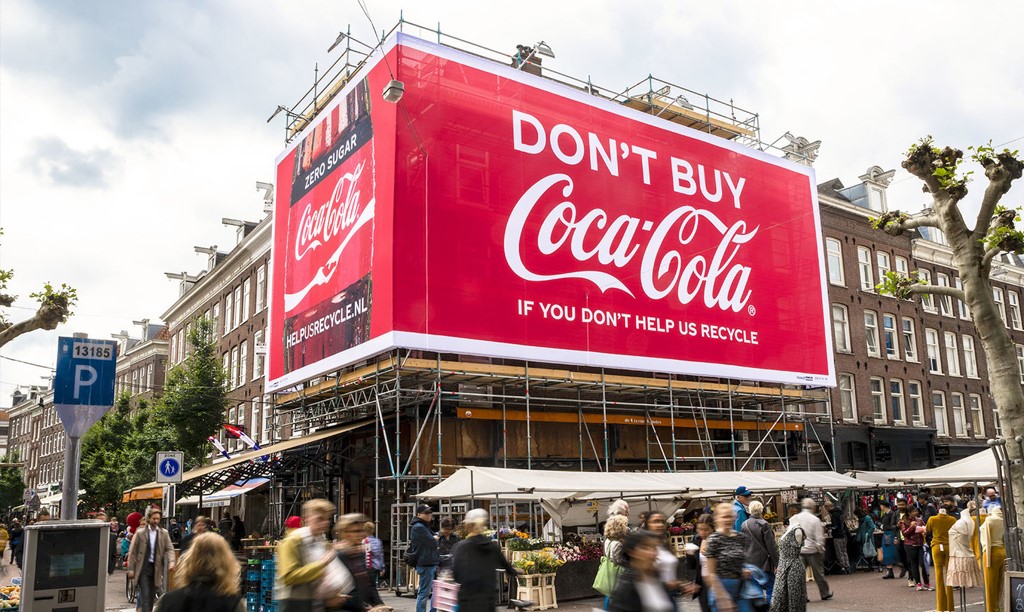 06 Sep If you’re not going to recycle don’t buy Coca-Cola. Is it a risky campaign?

Posted at 10:19h in Uncategorized by Nacho Noriega 0 Comments

If you’re not going to recycle don’t buy Coca-Cola. Is it a risky campaign?

Sustainability can’t be just a slogan or one more item on the checklist of objectives for organizations’ CSR departments. It must be imbued in the company’s purpose, in its reason to exist, and aligned with consumers needs and expectations. In short, sustainability is a challenge and a commitment that must respond to the demands of a society increasingly aware of the impact of its decisions.

Some Brands, in any case, are beginningto understand their role as influencersin the change of mindset necessary to re-set our relationship with the planet, from responsible production, of course, but also from consumer education.

The campaign launched by Coca-Cola this summer in some European countries, such as the Netherlands and Belgium, urging consumers not to buy its products if they were not willing to recycle, points in this regard. Under the slogan “Don’t buy Coca-Cola if you don’t help us recycle”, the company has used its brand to inspire people on the path to sustainability, abandoning classic consumer marketing campaigns.

This action is an answer, said the company, to a survey among stakeholders and consumers, who demanded a more sustainable use of the brand.  Coca-Cola is one of the 25 most recognized – whose logos are recognized by people around the world – and is among the 100 most valuable brands, with an estimated value of 57.3 billion dollars (51.8 billion euros) and a net profit of 6,434 million dollars (5,707 million euros) in 2018.

Although not as explicit as the campaign in Belgium and the Netherlands, this year Coca-Cola also launched its recycling message in the Italian market, where roadside billboards and bus stops pointed with a long arm and a finger to the exact point where recycling bins were. The motto of the Italian campaign “open, taste and recycle with us” invited not only to enjoy but to act together with the company in the recycling of bottles or cans.

In Belgium, according to a company statement, 85% of its packaging is already made from recycled materials, but “it is not enough”, say company executives in that country. The summer campaign, that will be active until the end of September, also includes TV ads and presence in festivals. It is the first campaign in the mass consumption sector urging customers not to buy if they don’t recycle the packaging later.

On a global scale, the company has set itself a goal for the year 2025 to meet the objectives contained in its sustainability strategy entitled Advances, including collecting and helping to recycle 100% of the packaging it markets. Also, that packaging of The Coca-Cola Company products contains at least 50% recycled materials.

As part of this commitment, in the United Kingdom, for example, in 2013 Coca-Cola launched “Don’t waste. Create”, a six-week educational campaign, during which parents sent suggestions on how to reuse the bottles and in return received product coupons. The aim of the campaign was for families to reduce their plastic waste by recycling bottles from the company’s various products – Coca-Cola, Fanta, Dr. Pepper, Sprite – using them creatively as bird feeders, for example.

In addition to local efforts in every market, in 2018 the company launched the global campaign “A World Without Waste”, with its corresponding Spanish motto “Un mundo sin residuos” and the hashtag #unmundosinresiduos for Spanish-speaking markets, that account for a good share of the brand’s profits. All of these initiatives are part the Atlanta-based company goals to adapt its business model to a new reality where consumers are increasingly conscious of the need for companies to transcend the mere objective of profit and commit to building a more sustainable society, from all points of view: social, economic and environmental.

According to the company it is about “growing correctly and responsibly, not just in the easiest way”. In terms of processes, it is also introducing changes and is betting on new materials, such as vegetable resins to create 100% recyclable bottles made up to 30% with materials from vegetable origin, derived from sugar cane.

For the time being, although much remains to be done, the company has achieved the goal it set itself to in 2010 to “return 100% of the water contained in its drinks to nature and communities.” The proposed date was 2020, but it was achieved in 2015, becoming the first company to achieve such a high-profile replenishment target (the 115% replenishment) on the Fortune 500 list.

Meanwhile, the commitment to urge consumers not to buy their product if they are not willing to recycle seems risky, according to experts. We will see, at the end of the campaign, how consumers reacted and whether the company income has suffered or whether it has managed to raise awareness and increase recycling rates.